A major part of Guildry function is attendance at official Council and Craft celebrations, at which, some, or all of the following regalia will be worn; 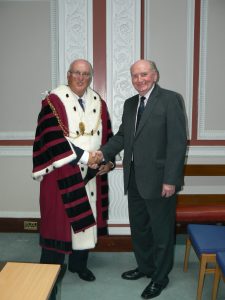 Originally purchased in 1818 at a cost of £65, this heavy gold chain measures 21ft and is worn in several loops by the Lord Dean on ceremonial occasions. An appending gold medallion depicts the iconic 4XX symbol, which has been designed, as an insignia badge by Ms. Tina Watson, Lecturer at Duncan of Jordanston, Dundee University.

One of the first acts made by King John during his first year of accession to the English throne was to grant Dundee merchants the privilege of free trade throughout all his lands with the exception of the City of London.

As well as granting the Guildry additional powers over the Trade Crafts, this document also designated the taxes on goods for the upkeep of the altar at St Mary’s Church.